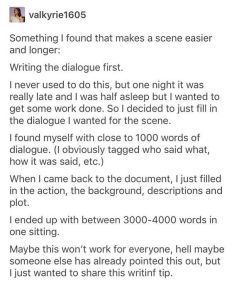 Recently, I found a post on Pinterest that I found very interesting. The post goes to say that writing dialogue first makes the scene easier and longer . The author goes to say that this method worked for him/her when he/she wanted to get some work done. Overall, I think that’s some decent advice.

Personally, it hasn’t been something I’ve tried consciously. I’ve done something similar where I write the basic lines of a scene and dialogue and then go back to fill in the blanks. My method made  me feel like I was too lazy to write everything out completely but seeing this post changes that.

Like many, I’ve always tried to put my best work on the page even if that means rewriting the same sentence a few hundred times. It doesn’t help that I know that that’s not how it works but I find myself doing it anyway. I’ve been trying to work on that, and while there has been progress, there are times when I tend to slip.

I (probably) won’t be using this method consciously right off the bat but I’m not going to write if off. It kind of feels like writing an outline more than anything else but that’s just how I feel. In part I believe because I’ve always associated going back and adding things to a manuscript as rewriting or even editing, I can’t immediately jump to using this method.

Overall, I’m always on the look out for advice and tips that will help me become a better writer. I always strive to grow my skills and abilities. Plus, it’s not like I’m opposed to trying new things. If the chance presents itself, I might just end up writing the dialogue first and the filling in the blanks later.