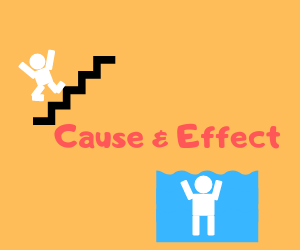 Many years I go, I heard a really good piece of advice. Or maybe I read it somewhere but I can’t remember the exact details. However, I will say that that advice stuck with me even now. It floats around in my head and pops up when I’m writing or reading over someone else’s work.

As I write this, I suddenly remembered that I read about the advice while researching how to write action.  That piece of advice is this “cause and effect”. Something happens before something else. Or another way to say it: there’s an action and then the consequences.

Take a look at the sentence that follows:

“Ron stumbled back as Henry punched him.”

The punch should come first and then the stumbling. At least, that is how I see it. It wouldn’t make much sense that someone would drown before falling into the water either or someone falling before tripping down some stairs.

Action isn’t the only thing that I use this advice for. I also use this when I writing in general. It’s how I create tension and conflict. If a character says something (cause) others will react differently (effect). It’s a fact that there are consequences for everything. Some might be mild, but others aren’t. I find it that this keeps my characters human. It means that they have real emotions and they react like human beings. They aren’t just filling up space. They have purpose.

Plus, I find it helpful to make a list of all the actions and their consequences so that I may, not only remember all the tiny details, but also so that I can bring that into the story along the way. Maybe a character holds a grudge over what was said. I have to remember what was said first in order to further develop that. That list of action and consequences aka cause and effect also helps with plotting. While it might not help for all instances, it can help for some.

For example, the protagonist is part of a special suit unit and they have a job somewhere. They jump out of a transport. Said protagonist suffers a malfunction and is seperated from the group. Now, we have consequences. If the protagonist can’t reboot her/his suit fast enough, they’ll be a pancake. Drama. Tension.

This is just but one example. Another I can think of is when it doesn’t involve actual writing instead. How can that be? The Cause and Effect list that I mentioned can be used before any writing begins.

Maybe you have a story in mind but you don’t know where to start. Write

I’ll use one of my stories for this. It’s has low sci-fi western vibe to it.

My protagonist is in a desert with enough provisions for himself. He comes across another human being, hurt and starving. Now, he has to ask himself  ‘do I help and deplete my resources faster or do I continue on my way?’ Not only is this a great situation to showcase the protagonist’s personality but it builds up to the potential consequences of running low on food. There’s also perhaps the mental trauma of leaving someone to die. In the end, my protagonist does help and now I have a lot of things to work with as the consequences unfold.

So, remember: action and then consequence. Cause and effect.