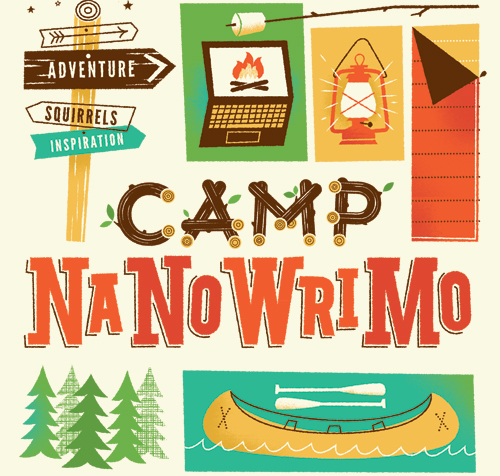 As June starts, I’ve come to realize that Camp NaNoWriMo (for July 2017) is only 25 days away. While this might seem far off, it usually gets here in a flash. This is why I have started thinking about which of the many stories in my idea notebook I’m going to flush out and write.

Instead of writing a paranormal story like I’ve done in the past, I’m going to try my hand at writing in the fantasy genre. Luckily for me, I have plenty of those ideas but I have asked myself “are any of these ideas ready to be a story?” The answer is yes. There are actually two ideas that I can develop further for a plot that makes sense (to me).

However, when I tried to develop one of those stories, it wasn’t a walk in the park. I had the idea of the world and how it worked in relation to the story. I wrote the history behind the founding of a guild that was going to be in the forerunner of the story. My characters were listed and the theme of the story was clear. Yet, when I thought about the details and how the story was going to unravel, my mind drew a blank.

Well, it wasn’t exactly a blank per say. I had the beginning chapter or so but afterwards, I don’t have any idea where the story would go from there. I know the end destination; I just don’t know how to get there.

The other story however, is more flushed out. I even wrote the story as a film once. All I’m keeping from that is the core story and theme. I did have to move some characters around and add new ones but for the most part I know what’s going to happen. I have scenes planned out and I know how to get to the end. So, there’s no competition between the stories, right?

Well, there is 25 days left until July. I do have time to plan and think about the first idea. Plus, it’s not like I can’t plan out both stories and decide which story I want to write more. Even so, the only thing I want to avoid is starting a story and having no idea what’s going to happen next. If I really think about it, I guess that’s what NaNoWriMo is all about (in a way). How well can you make up a story in a month?

Okay, no. That’s not what NaNoWriMo is all about but it is my take on it. At least for the moment it is.

For now, I’ll just welcome the time I have left until July. There’s no rush and there is only so much planning I can do before I need to write.