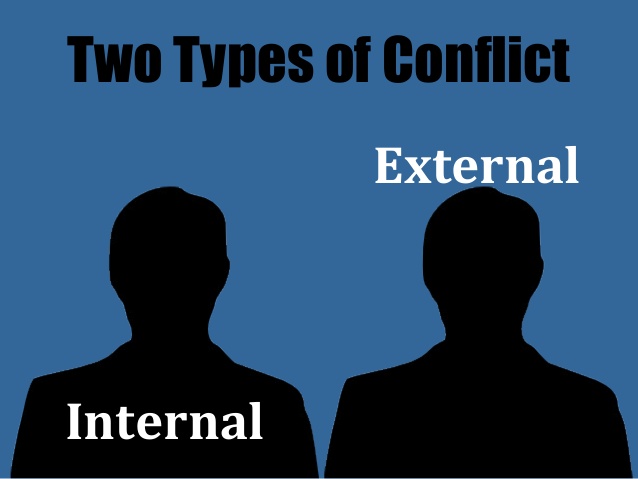 As July approaches, my sister and I are hard at work planning out her story. By this point, I should say our story but that still feels weird. I don’t believe I will ever consider this story as mine because I had no say in the idea development. Saying that, if collaborating helps my sister finally write her story then I’m more than happy to do that.

Recently, we discussed the source of conflict of the novel. While we don’t have the most of the middle and the ending planned, we still wanted to plan out what would drive the story forward and what kind of obstacles the main character, Nina, would face. I like to term this discussion as: “how do I make the life of a character more difficult?”

First, we started with the external conflict. This conflict derives from external forces. Meaning, the conflict comes from outside forces like a flat tire on a way to a job interview. Or a jealous co-worker secretly sabotaging the main character’s report. It can also be two people arguing.

Now, Internal conflict comes from within the main character. I like to think of these as feelings or simple terms: the inner struggle. e.g. stopping to help someone who fell or hurry to an important appointment. Or pay your bills early or buy that book you have no room on yourself for. It’s also choosing right from wrong. Depending on the character and/or situation, right and wrong can be different.

Not only did my sister and myself identify where the conflict was coming from, we were also able to expand on those ideas. Furthermore, Nina, the MC, will be overwhelm with her new position and current one and she believes there’s been a mistake and waits for the moment where someone else replaces her. This leads to her work being sloppy and incompetent and it further leads to confrontation with the boss and others in the managerial positions.

I’m happy to say that Nina’s life will be very, very difficult.

On a different side note: two of my reviews are up. One of them is called Tubocity. The game is an endless runner as you try to see how far can you get as you jump and swipe your way past obstacles.

The other game is called Picture Perfect Crossword. It is exactly what is sounds like. Players are given a picture to name. They select letters at the bottom of the screen to fill out the crossword puzzle.